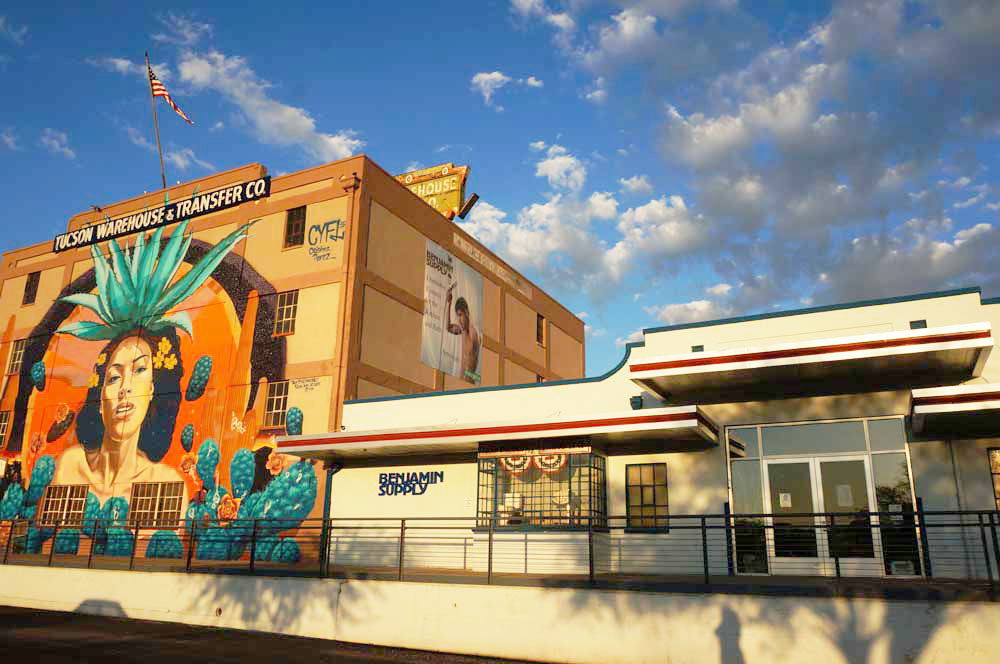 Call us for an appointment today!

The Warehouse and Transfer Company Buildings and their History

Home of Benjamin Supply, the historic Warehouse and Transfer block possesses a past that is as unique and storied as that of Tucson itself. From assisting in transferring products across Pima County to helping people store their belongings, and now to its current role as a hub for home fixtures and art, the Warehouse and Transfer building has always served as a microcosm of the inspirations behind the growth of Tucson.

Every blare of the trains horn going through downtown reminds one of the humble roots adjacent to the Presidio of old western days and what it took to build this charming city. Quite literally the organizations that have occupied this footprint have always impacted the growth of the region through three centuries. The history of the Tucson Warehouse and Transfer Building truly spans generations, going back to the 1800’s. Considering Arizona has only been a state for a mere 107 years, it has been a rapid and constant evolution, and its inhabitants have always been fiercely proud of their roots. This pride is evident in the continued mission of Benjamin Supply as well as the other tenants of Tucson Warehouse and Transfer, honoring the legacy of the building while simultaneously looking ahead to the future.

In many respects, the Warehouse and Transfer Building embodies the ever-tenacious spirit of the desert Southwest. While most of Tucson’s early buildings were constructed using flammable wood and did not survive a few decades (much less a full century), our building has withstood the test of time. Built in 1918, the longevity of the current Warehouse and Transfer Building can be attributed to the fact that its entire 16,000 square feet is made of solid concrete and therefore fireproof. To add to the building’s individuality, it is one of only 5 buildings in Tucson designed by renowned California-based architects William Curlett & Sons. Other local treasures by this design team include the Hotel Congress, the Rialto Theater and the Rialto Building, as well as part of the former Santa Rita Hotel.

Our story begins just south of Tucson in Santa Cruz County, on what used to be a large Spanish land grant. In 1883, that land was purchased by Colin Cameron, a native Pennsylvanian and soon-to-be livestock baron who would start the massive San Rafael Cattle Company. An astute businessman and civic participant, Cameron managed thousands of cattle that were sold to markets across the country. Undoubtedly the most influential individual in the establishment of Arizona’s nascent cattle industry, Cameron was an integral part of statewide initiatives in sanitation to keep the area’s livestock healthy. Hereford cattle in the region is because of him and in Hereford Arizona his iconic ranch house was used for the filming of the movie Oklahoma.

After over two decades of prosperous business growth, Cameron sold his venture in 1906 and moved just north to Tucson. Ever the entrepreneur, he noticed Tucson's blossoming, albeit still widely dispersed, population and saw a need for the logistics to move around goods. He purchased land near the railroad double spur line, envisioning a building where freight could be unloaded and easily transferred downtown, as well as to the new university and outlying Fort Lowell. By way of Cameron’s vision and insight, the Tucson Transfer Company was established. As automobiles were not yet readily available, Cameron first used horses and wagons as means of transport, most of which were rented from his friend Fred Ronstadt's company. As the business began to grow, Cameron built stables and corrals on site for the Clydesdales (which were used to carry the heavier loads), as well as other horses and mules. The wooden warehouse, which was originally located at 100 E. 6th Street, had the capacity to take in and store home furnishings, equipment, and building supplies that in turn were transferred throughout Pima and neighboring counties. At the time, only 3 or 4 employees worked in the warehouse for $10 a week, with the average moving fee being a mere 60 cents. The business model was simultaneously straightforward and ingenious: as freight came in off the railroads, Tucson Transfer Company would then distribute it to various locations throughout the region.

The Next Generation - More Solid

Colin Cameron passed away in 1911, leaving his daughter Mary Wakefield and her husband Walter Wakefield to manage the property and business. As Tucson's population doubled, the opportunities flourished, and the company’s horses soon were replaced with industrial-sized trucks. Carrying on the legacy of their predecessor’s entrepreneurial spirit, the Wakefields had tanks installed to store oil; after storage, this oil would then be transported to local mines. Disaster struck in 1915, however, when monsoon lightning caused a fire in one of the massive 10,000-gallon oil tanks. The resulting fire caused almost one thousand dollars in damage and nearly burned the warehouse to the ground. Despite this setback, the Wakefields and Tucson Transfer Company demonstrated remarkable resilience. Walter Wakefield, realizing the need to expand the operation in the wake of tragedy, committed to moving the business to a building that would not be disaster-prone. Thus, in 1916, a four story, solid concrete warehouse was commissioned, which at the time was the largest building of its kind. Originally designed by Curlett and Sons, the entire building was constructed for just over $30,000. The new fireproof design attracted local businesses, allowing these vendors to store valuables of all sizes in a convenient location. Over the years, the four-story warehouse would store everything from oriental rugs and silver to grand pianos. The building was even large enough for cars to be housed in the upper floors of the facility, and a massive elevator was installed to serve the needs of nearby dealerships that needed inventory to be stored.

In addition to these various purposes, the new concrete warehouse also provided space for ice storage when the Tucson Ice Company lost its roof in a monsoon storm, a true testament to the spirit of Tucson businesses helping each other out. As there was no refrigeration or air conditioning, ice was an incredibly precious commodity, and the generosity of Tucson Transfer Company was noticed and appreciated. Due to both his obvious business acumen and genuine efforts to better the community, Walter Wakefield was named President of the Arizona National Bank. Unfortunately, Walter died shortly after in 1919 at the young age of 38, a causality of the influenza pandemic that swept the world.

With her father and her husband passed, Mary Wakefield assumed ownership of the business with the same strong entrepreneurial spirit that her family so famously wielded. As Tucson Transfer Company flourished, Mary required assistance with operations; because of this, she invited former employee Harry Harpham, now back from World War I, to assume the duties of manager, as he was already familiar with the inner workings of the trade and the community attitude. Together, Mary and Harry realized that the local economy was developing a need for personal storage space. Many of whom were recovering from gas poisoning, World War I veterans were flocking to Tucson because of the healthy climate. Naturally, as these veterans were getting settled into the Tucson area, they needed somewhere to keep their belongings. Tapping into this newfound demand, Mary segmented the upper flour into sixty-one individual mini storage rooms, each of which could be rented for a special rate. By 1922, the business had “warehouse” tacked onto its name, thus officially becoming Tucson Warehouse and Transfer Company and pioneers in the self-storage industry. As the company grew and technology progresses, the need for horse-drawn wagons quickly diminished. The last team of Clydesdales used by the company went to the University of Arizona Farms in 1932.

Though Tucson Warehouse and Transfer Company looked optimistically ahead to a new decade, the Great Depression caused belts to tighten everywhere; however, the nation’s financial crisis actually created a new demand for preserving produce and provisions. Seizing upon this opportunity, Mary Wakefield hired a young architect by the name of Josias Joesler, an immigrant from Switzerland, to design a new “ice house” as an addition to the warehouse building. Joesler, who did both commercial and residential projects and was famous for incorporating southwestern motifs in his work (including hand-applied plaster, colored concrete, and decorative metalworks), went on to become one of Tucson’s most iconic and heralded architects.

In 1936, his legacy was evident in the Sixth Street warehouse, where the ice house was built in a unique deco industrial style and boasted a 6,000 square foot ice manufacturing plant. With a well right on property and proximity to the train, it was only logical that the Home Ice and Coal Company eventually became part of Tucson Warehouse and Transfer’s offerings. As a result, the warehouse had a host of especially unique features, including an elevator run by water. The building also had built-in floor scales, one of which is still visible (and perfectly functioning!) in the showroom of Benjamin Supply. It is said that the University of Arizona and other local hospitals would need to use the scale to weigh extra large people outside the scope of their capacity!

Mary and Walter Wakefield had no children of their own; however, as a widow, Mary raised Mary Ann, the orphaned daughter of her sister from the age of 9. A direct descendent of Colin Cameron, Mary Ann knew intrinsically about dedication and success, and she grew up learning from her family by working at the business. In 1948, Mary Ann married Al Kinder Jr., who was originally stationed at the Davis-Monthan air base in Tucson. Soon, he became a part of the family business, and eventually Al became manager of the entire company. Al and Mary Ann would have three children, though it was their son, Albert III, who would carry on the family business. As the city and business grew alongside each other, Tucson Warehouse and Transfer Company became known primarily for moving and storing heavy equipment. For example, in 1949 the company moved sections of massive kilns to the Arizona Portland Cement plant northeast of town. They moved enormous trucks and electric shovels to the copper mines, as well as giant diesel motors to Douglas, Arizona. It is evident that they literally helped build this city. In 1963, they kept planes from Davis-Monthan in a hangar across the street that the company used as a converted storage facility. And each day the big rolls of newspaper that were used by the newspapers came from the Tucson Warehouse and Transfer Company. Even the telescopes for Kitt Peak were on their way via their trucks.

From it’s “Call 211” neon sign on the top of the building to after becoming a Mayflower moving franchise, the company and it’s trucks were renown. In 1998 when the historic block was purchased by the Bermans the Cameron/Wakefield/Kinder family had served the city well and was very much in the heart of Tucson - true movers and shakers and an integral facet of its history.

Use the form below to schedule an appointment or submit a question or comment.